STORIES FROM SYRIA AND BEYOND

We are delighted to present a double bill on Syria, with an interview with the author of  ‘Syria’s Secret Library’ – and a short film – Suspended – tracking the journey of a Syrian refuge now settled in Hertfordshire. 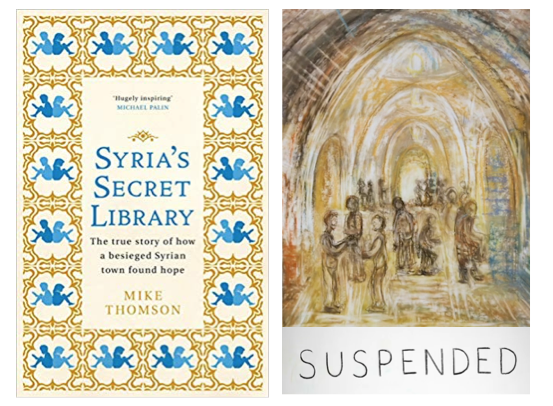 Mike Thomson is a multi-award-winning World Affairs correspondent for the BBC. His book, “Syria’s Secret Library”, tells an extraordinary story from bombed and besieged Daraya, just outside Damascus. Buried deep beneath the town’s shattered streets was a literary sanctuary. A secret oasis of calm, filled with thousands of books rescued under sniper fire from abandoned buildings. Michael Palin described this book as “hugely inspiring”.

‘Herts Welcomes Refugees’ is a charity helping to resettle refugees and making those seeking sanctuary feel welcome. In collaboration with composer/sound designer Katie Seaton and artist Rosie Wyllie, they produced a 15 minute animated film called ‘Suspended’. It tells the story of a Syrian family now living in the UK. The words are those of the father, spoken in English by an actor, and we have been told by other Syrians that this is their story too. It was a finalist at the 2020 Film Only Film festival. [Warning – includes a couple of tough scenes, describing his torture].